A few weeks ago, I travelled from London to Marrakech by train (and boat). Like with my Moscow to Shanghai trip, I kept a travel diary and have once again reproduced it in blog form. As before, each entry is reproduced as it was written on the day it describes, during or shortly after the moment (bar spelling/grammatical fixes). Read it with your eyes. 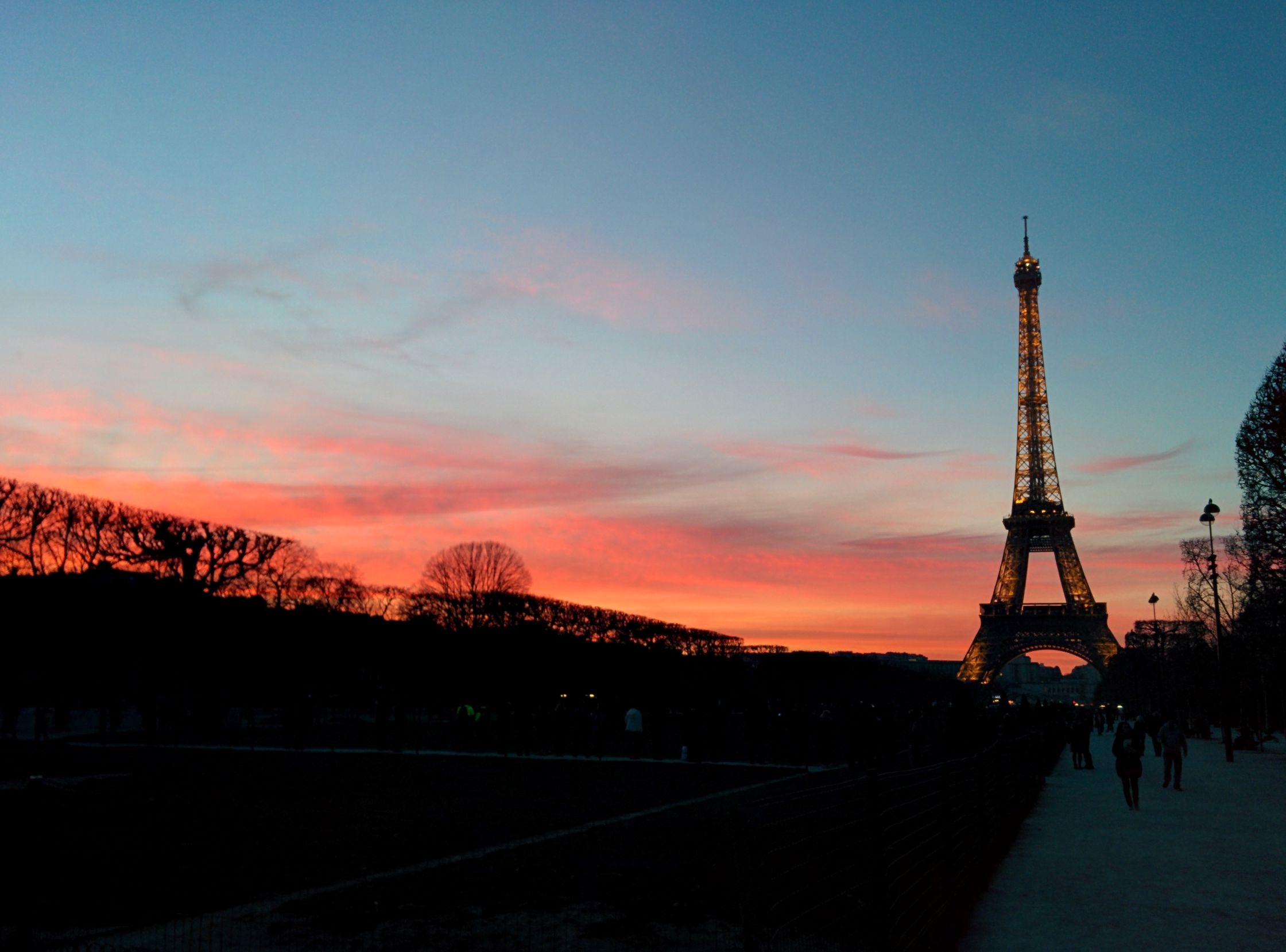 At St Pancras there were 3 French guys in a row, all in berets, all eating baguettes. Come on. Arrived in Paris, stepping into a cloud of smoke. Apparently everyone here smokes. Smokey smell persists as I head to Sacré-Cœur. Very crowded. Long walk across Paris as the sun sets. Fantastic sky backs the Eiffel tower. Check into hostel, roommates are an Australian exchange student and a Korean among others. Head to a shop with the Korean to buy food and drink. Korean says I am like Viking for wearing t-shirt in 15° weather. Cider is confiscated, but we sneak a lot of gin as we cook and eat pork and salt. Join a Mexican studying in Dublin for a while. Drunkenly complain about visas. Sleep. 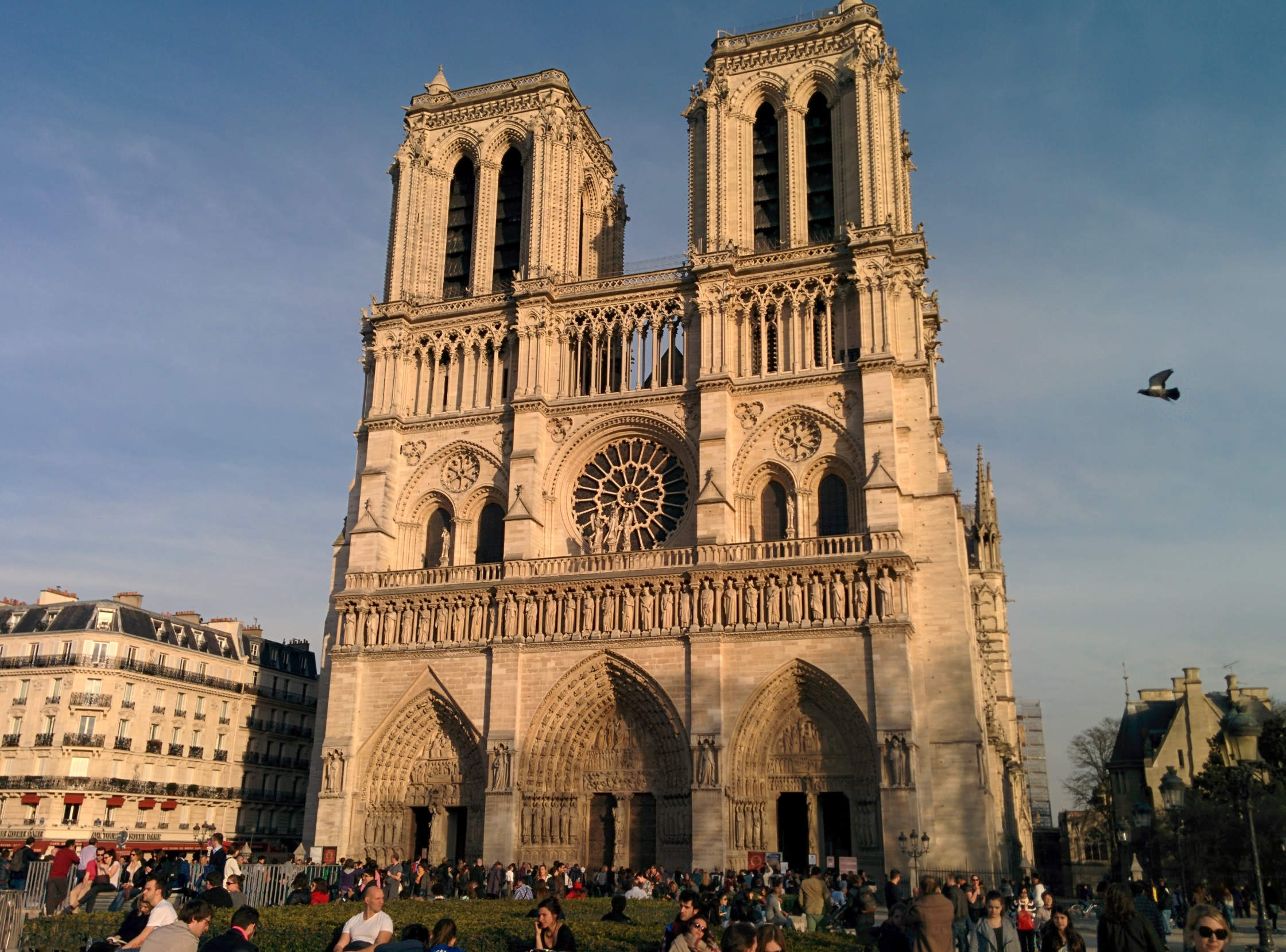 Wake slowly and head down to breakfast at 9. See Korean guy who has been up since a headache woke him at 6am. Head off towards Eiffel tower, following a market under some train tracks. Walk up and down the tower, figuring out remainder of route. Head towards Palais de Chaillot, stopping across the road for an omelette. Head through smaller streets towards the Arc de Triomphe. After the Arc, head in direction of the Louvre stopping in the Petit Palais, where I sit in the garden for a while. Keep going to the Louvre where a man is controlling pigeons with seed. Decide to return tomorrow and head to Notre Dame as the sun goes down. Quick bite to eat across the river then a long walk back. Buy a cable en route and make it back around 9. Shower and struggle to stay awake for a little while. 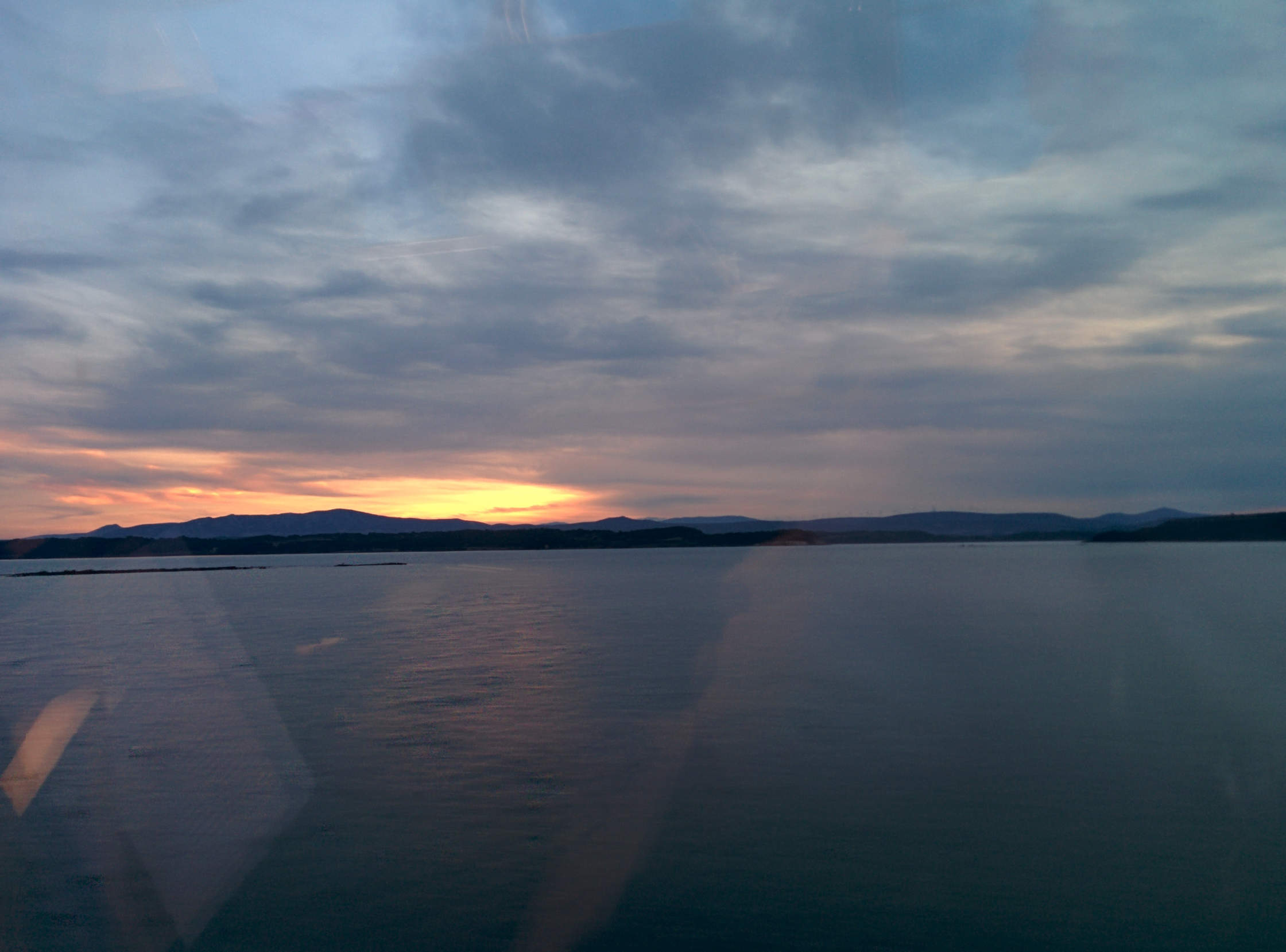 Checked out by 10. Take the metro to the Louvre only to see the longest queue in France. Scrap that plan then. Instead walk slowly to Notre Dame again, stopping for a lunch of omelette and coffee. See firemen practising hosing things along the Siene, almost shooting a bird out of the sky. Slow walk to Gare de Lyon. Board train, settle into comfortable seat and watch France roll by. The earth yellows and the houses switch to pastel shades as we move south. By 19:00 the we are rolling by coastal waters and the sun is setting behind the mountains. 2 hour stopover at Barcelona where I grab food. Final train is a sleeper and I get top bunk in a 6 bunk compartment. Sleep comes. 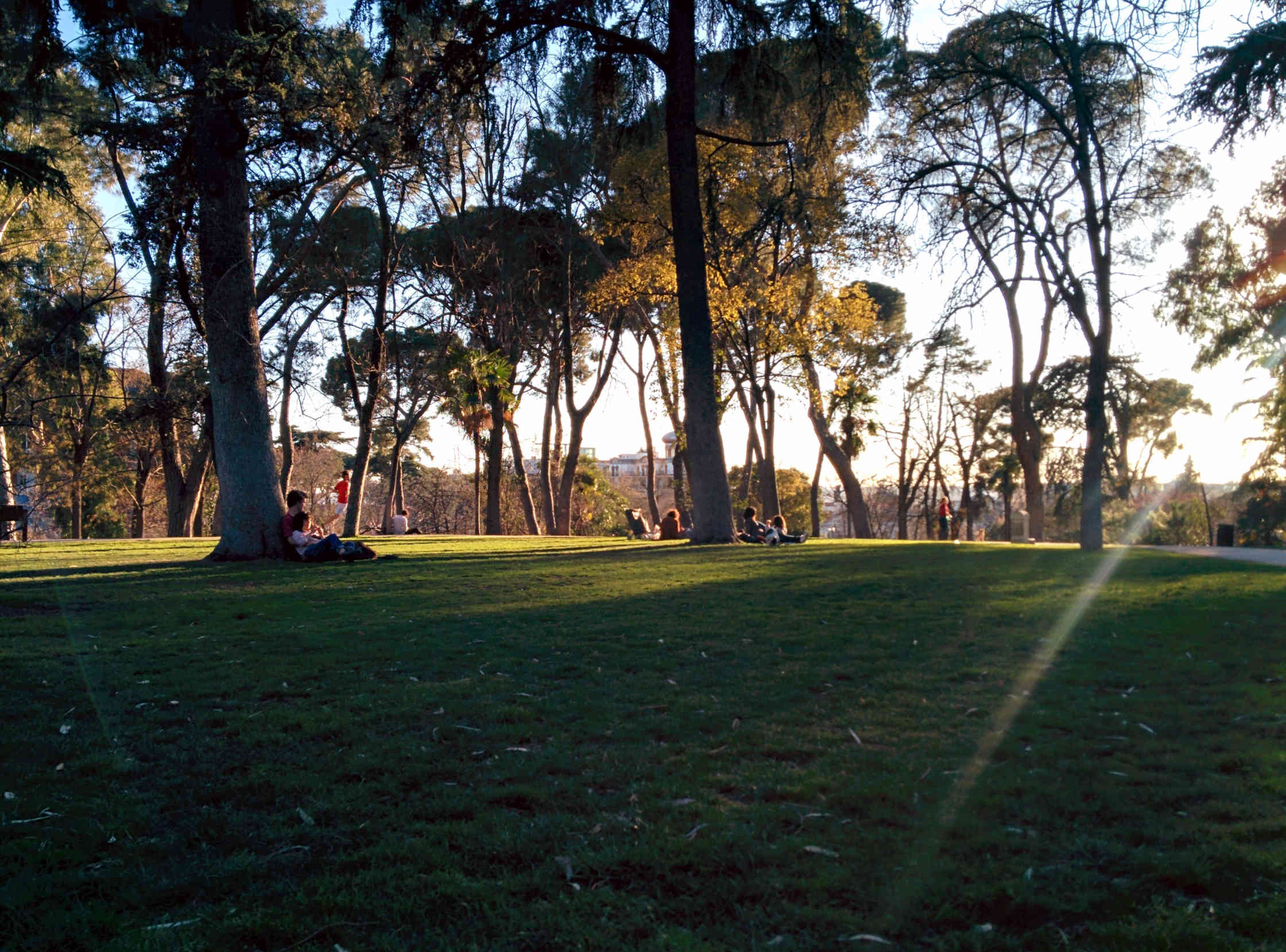 Light sleep. Wake several times. Quick wash before arrival in Madrid. Connection to Antorcha shortly after sunrise. Reach hostel but check in is at 13:00, so I wander through the Plaza and North, stopping for a tortilla and tea as breakfast. Finally check in. Hostel is cool but my bed isn’t great. Shower, get set up and head back out, wandering aimlessly for a while. Paella for lunch. Finally make it to Parque del Retiro to chill out for a bit. Back to the hostel and talk to Scottish Lauren and German Felicia and Oregon barman for ages. Drinking leads to pub crawl. 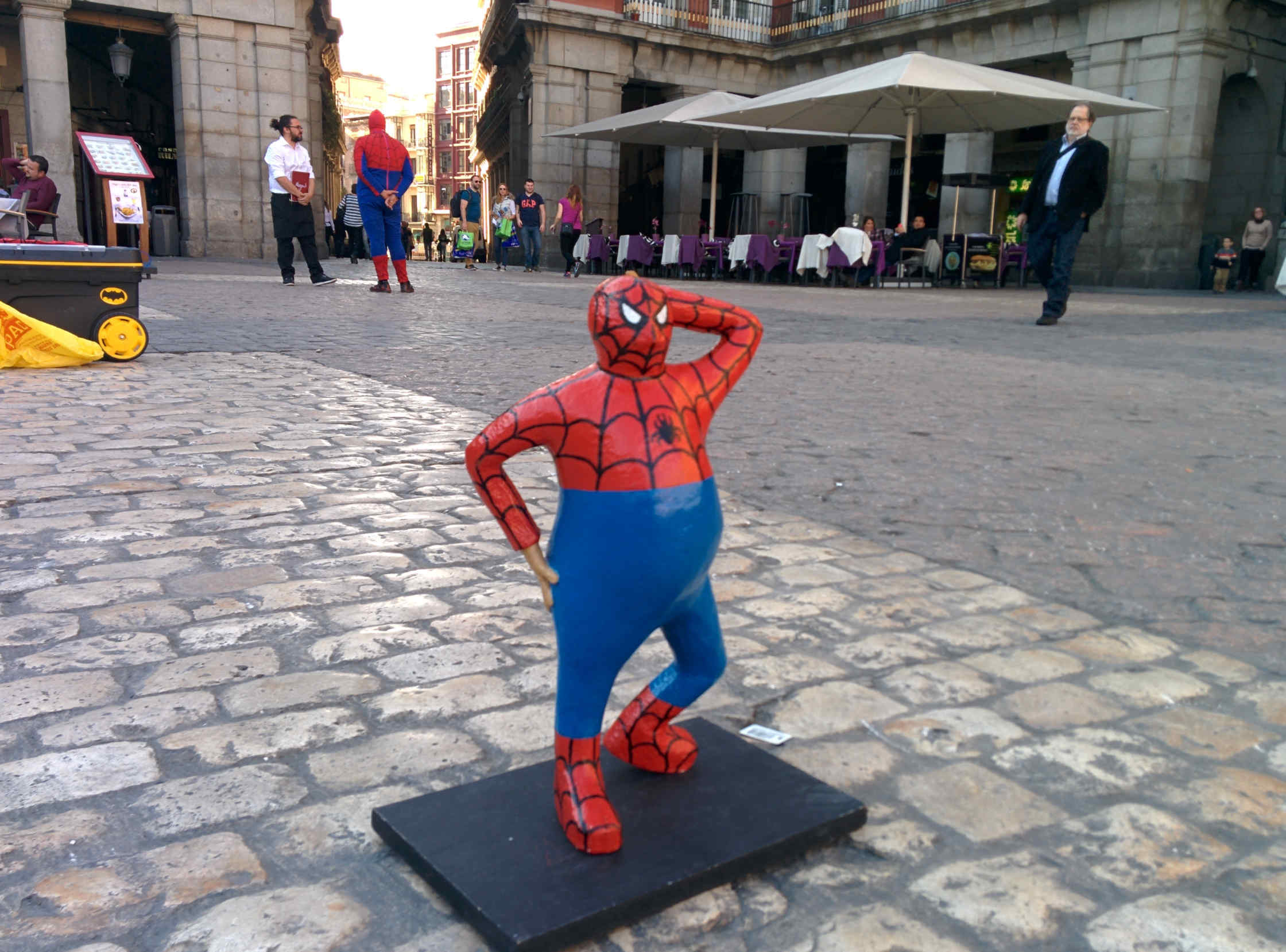 Wake at 11. Compare stories from last night with Lauren. Shower and have very late breakfast of tortilla. Orange juice is nectar from the gods. Bump into a walking tour in Sol and join them. Take a similar route to yesterday but learn more. Group of 3 Australians, 2 Germans, 2 Chileans, 1 Ohio and 1 other Brit. At the Palace a motorcade leaves “Oh shit, it’s the King!” says the guide. Australians say I have a perfect Daniel Radcliffe accent. We have a group meal at a great underground restaurant. Me and 2 Aussies get 90% off tickets to El Público for later. I go home, pack, grab a gluten free banana cake and head to the Teatro Real. Feel under-dressed but enjoy the opera. Part ways with Aussies and head back to hostel. I cash in my free Sangria token and chat with Lauren and Oregon about religion, peanut butter, bull fighting and feminism until 2am. 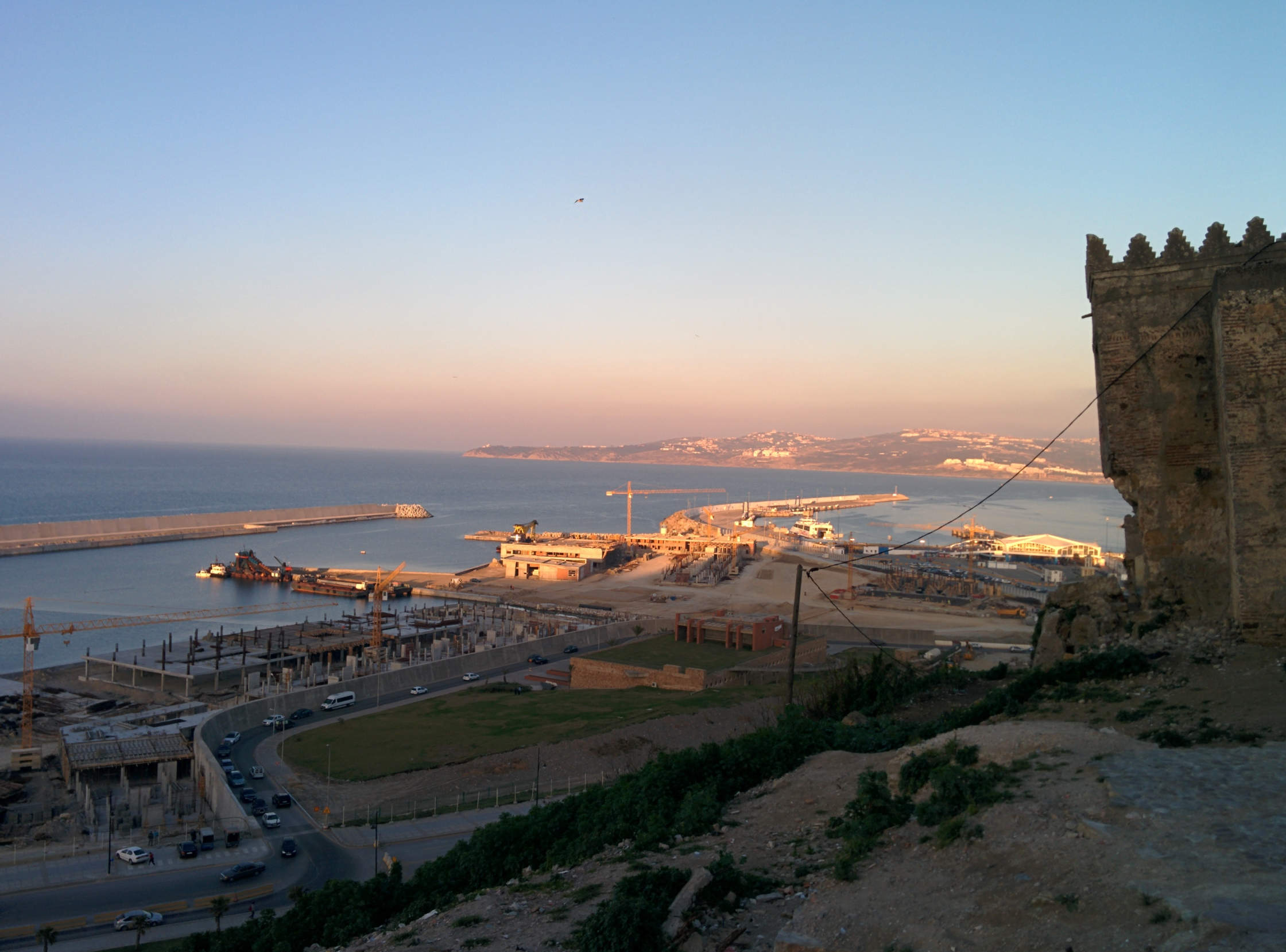 Wake at 6 and leave by 8 after saying my goodbyes. Exciting breakfast if corn thins on the train. Long ride to Algericas through lovely scenery with ample naps. Sort out ticket (have to buy another because I forgot my credit card) after arrival. Have a quick tagine for lunch before boarding bus to Tarifa. Amazing views and we almost touch the clouds. At Tarifa I talk to a nice old Moroccan gentleman from Brussels. Long queues as we go through passport control on the boat. Strangely apprehensive. Pensive on the crossing. This will be my first time in Africa and first time leaving the EU from not-England. Comparable to Mongolia/China border crossing but lesser somehow. More arbitrary. Fake tour guide takes me to hostel but I shake him afterwards. Meet some Germans in the hostel and search for food with them. Intense walk around the Medina as we are accosted and threatened. Head back to drop off non-essentials then grab some tortilla from a lovely old spanish street vendor. He and another old guy say I look like Robin Hood. Shisha on the hostel roof terrace for a bit with other Germans, then inside to play German Yhatzee (Kniffel?) until 1am. Very comfortable sleep follows. 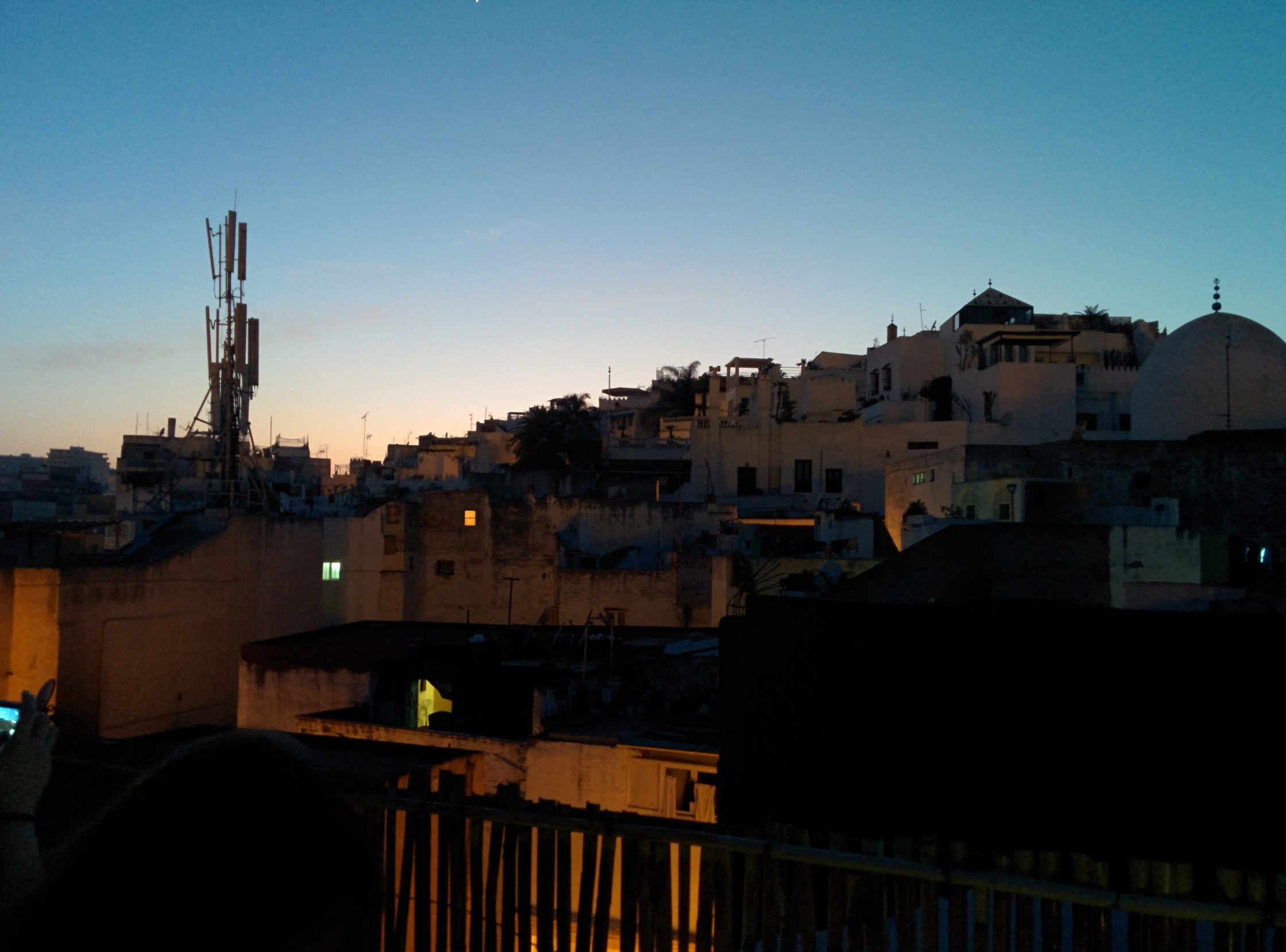 Wake at 10. Breakfast is wheat based but I have the tea and coffee before heading out to the marina. Tagine and mint tea at a restaurant while talking with a Spanish couple. Dude outside starts throwing rocks at another guy. Head back, buy some food and get lost briefly. Bump into a very nice guy on his way to prayer. Return to hostel and chill for a bit. Translate for a bit between hostel dude and Mexican Rodrigo. Head out again to buy tickets for tomorrow. Hang out with Americans at the hostel ‘Team Midwest’ and NY photographer. Chat, order tajine to the hostel and drink for hours. Bed at midnight. 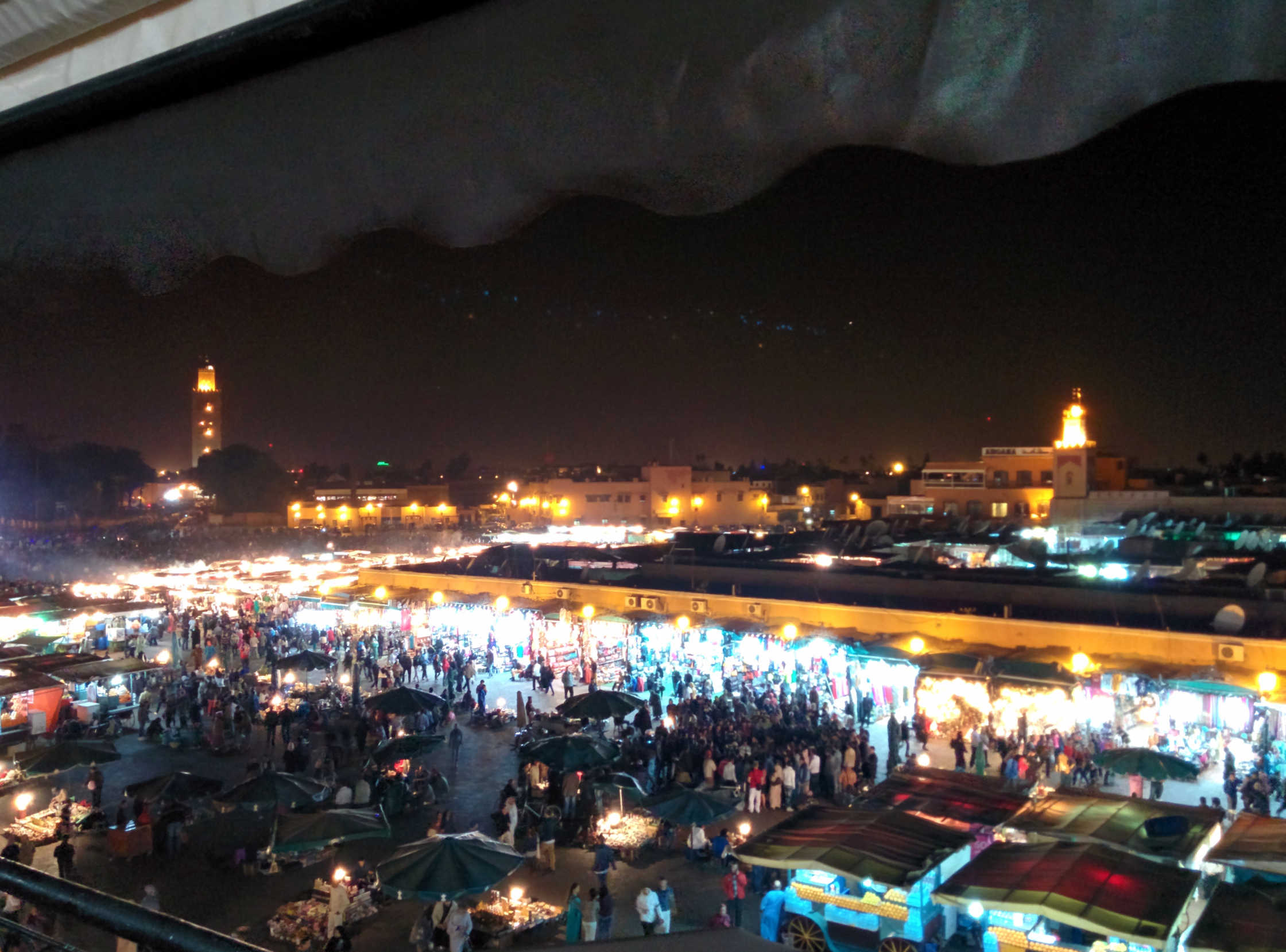 Just realised it is day 8. Wow. Seen a lot so far. Wake at 5:30. Catch the dregs of sunrise upstairs before heading out and catching the first taxi I see to the station. Driver speaks only Arabic but we converse a little. Train leaves at 7:30. On train, scenery starts out green with yellow earth. Still verdant at 9. At 9:30 we enter cold mist or fog? At 10:00 I see a cow jump. Also we are leaving the fog/mist now. Pass through Rabat at 11:15 and reach Casablanca by 12. Brief confusion about ticket but I board the Marrakech train at 12:50 in 2nd class. Turns out the ticket is fine. Moving away from Casablanca, the land gets very gradually less lush and redder. By 2:30 the surroundings look distinctly like a red Mongolia. By 3:30 the land is flat, yellow-red but still lightly grassy. Shortly after the Atlas mountains begin to loom in the distance. At Marrakech station I take taxi to Jamaa el-Fna. Within seconds I see more white people than my whole time in Tangier. Hostel is pretty, shower not great. Talk to Erin, Grant and Phil before heading out to meet Erin’s friends. Overpriced but decent kefta tajine at Cafe de France with a nice view. Wander through food markets after where a tout does an excellent cockney accent. 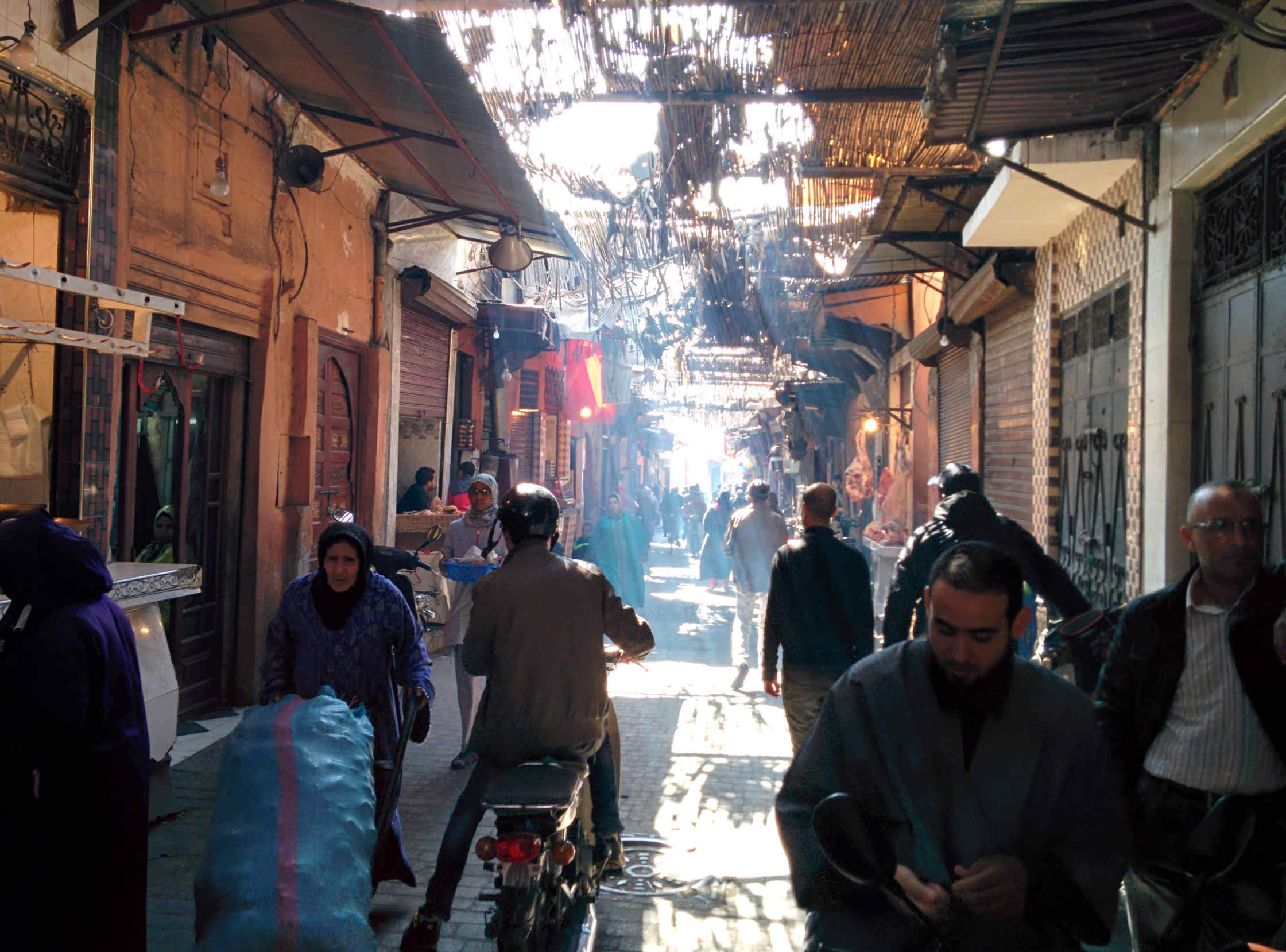 Wake surprisingly early then go downstairs to food I can’t eat. Have coffee and chat with Abbie and Matt from Brighton before heading out. Wander north into the souk, avoid getting conned into a tannery tour. Find a French couple (dude is in the band Tears of God) at the north exit and lead them back to the square. Food in the square then back to the hostel to play with Snookie the hostel cat and a make quick mothers day Skype call. Back out to head south to the photography museum and back in time to meet Matt and Abbie again to find Kosybar at sunset. Massively mislead to the Kasbah but get there in time. Chat for ages and eat free olives before heading to Earth cafe for an excellent meal. Head off in search of a bar. Have some E-number flavoured ice cream. First bar serves only beer and overpriced wine so we head to a tacky hotel lobby. Chat for a while about drugs (Abbie is a nurse) and jobs. A backpacker turns up and we take him back to our hostel as he needs a room. Feed the stray cat outside some yogurt and go inside for tea. 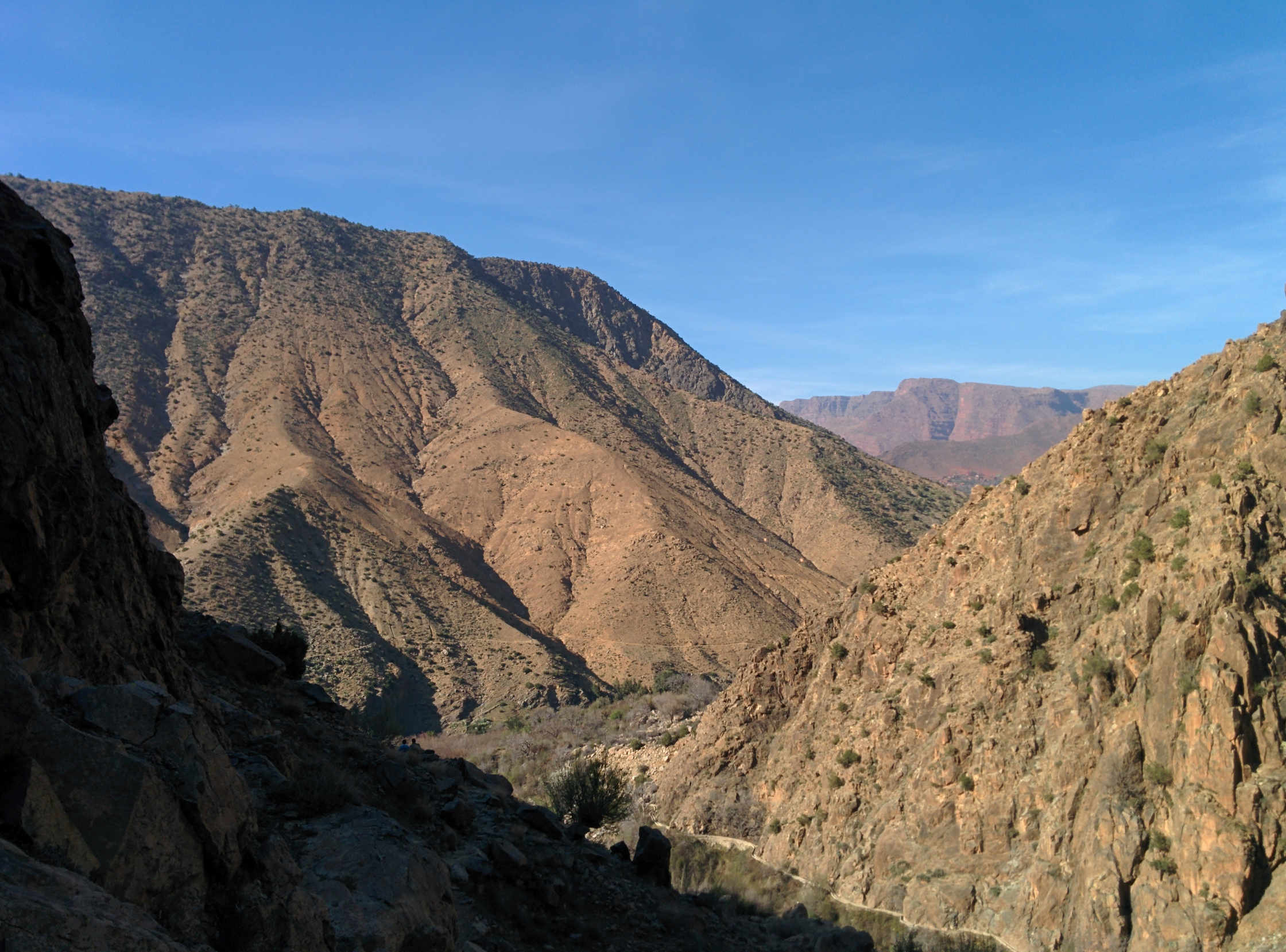 Pack for Ourika trip then head downstairs for breakfast. Meet a Florida and a London couple. Say goodbye to Grant, Matt and Abi then get picked up for tour. Pretty much abandoned in the square but others then start to turn up. Taken to minibus and driven out of city. Stop at a gift shop, a viewpoint, a herbal farm and a Berber house before reaching end point. Have lunch of tagine then head off on trek up river valley. Starts off easy but gets hairy quickly. A few turn back but most stay. There is a shop on a tiny river island. We have to jump over a waterfall and climb a ladder before the top. Well earned rest among beautiful vistas before easy descent. Back to the bus and a short stop at some camels before heading back Marrakech. Arrive around 7, charge my stuff and head back out for late dinner in the square. Shower upon return and chat with the Scots before earlyish sleep.

Poor sleep. Wake every hour. Say goodbye to Hamoud and Australia girl before heading off. Taxi from just off Jamaa el-Fna. Buy sweets for team and friends at airport. Easy security, numerous passport controls. Doritos for breakfast then plane.